In November 2021, we hosted our first members and friends of the CNNTD event “Exploring the Nexus of Equity, Poverty & NTDs”. With over 80 attendees from around Canada and the world, we explored the intersection between NTDs and equity and poverty throughout the 90-minute event.  Throughout the event, our remarks and discussion were captured in a graphic recording by Tanya Gadsby from Fuselight Creative.

The Honourable Senator Mohamed-Iqbal Ravalia, MD, opened the event sharing his personal experience as a medical doctor in Zimbabwe and highlighting why ending NTDs is critical to delivering effective and equitable global health. Following the opening session, we had a series of three short research snapshots led by Effect Hope, Nutrition International (NI) and scientists from the University of Saskatchewan and McGill University. In the first short session, speakers explored NTDs from pole to pole focusing on the impact of animals in the transmission of NTDs and highlighting their burden here in Canada. The session on the impact of soil transmitted helminths and adolescent health referred to a recent guide published by Nutrition International with technical input from McGill University and the CNNTD. In this talk, the importance of deworming treatment as part of women and girls’ health and education was discussed. In the final short session, Effect Hope presented some recent research from India on the mental health and stigma associated with leprosy and lymphatic filariasis, two of the permanently disabling NTDs.

In the third session, we welcomed our new Student and Young Professional Ambassador, Maëla Séguin, who won our video competition for the role with her video entry about Equity and NTDs. Maëla is a public health nurse and MSc student with a keen interest in global health and NTDs, and we are so excited to be working with her this year!

Finally, the event ended with a powerful closing message by Ms. Thoko Elphick-Pooley, Director of Uniting to Combat NTDs, introducing the Kigali Declaration to participants; and asking for Canadian commitment to the global NTD movement. The Kigali Declaration is a global document that outlines the commitments that researchers, NGOs, donors, national governments, individuals, pharmaceutical companies, and others will make to achieving the goals outlined in the WHO 2030 NTD Roadmap. On January 30th 2022, the CNNTD will call on Canadian civil society and the Canadian government to sign the Kigali Declaration showing their support to ending the neglect of NTDs.

For a full recording of the event, please click here 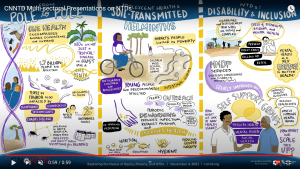