Skip to content
Home/Activities, The Power of Youth/Part 3 of our SYP Ambassador Series Spotlighting Canadian Efforts Against NTDs – May 2021
Previous Next 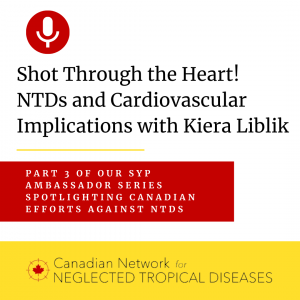 Shot Through the Heart! NTDs and Cardiovascular Implications with Kiera Liblik

In November 2020, I began working with the Canadian Network on NTDs as their Student and Young Professional Ambassador, with the mandate of engaging young Canadian voices in the fight against neglected tropical diseases (NTDs).  For this blog series, I’m speaking to leaders across Canada about their efforts to combat NTDs and the role young people can play in these efforts.

Kiera Liblik (she/her) is a second year medical student, and first year master’s student at Queen’s University in Kingston, Ontario. As a member of the Emerging Leaders Group of the Interamerican Society for Cardiology, Kiera is helping to understand the effect of NTDs on cardiovascular health. One of their current projects is the Neglected Tropical Diseases and other infectious diseases affecting the heart project or, the NET-Heart project, which examines literature around NTDs and their cardiovascular implications. I spoke with Kiera to learn about her work on NTDs and her advice for students and young professionals looking to get involved.

Kiera’s involvement in NTD work began when she was invited by Dr. Adrian Baranchuk, a cardiologist at Queen’s University, to support the NET-Heart project that aligned with her interests in cardiology and the social determinants of health. Their work began as a collection of systematic reviews to assess the impact of NTDs on cardiovascular implications. “Cardiovascular disease is the leading cause of mortality worldwide, and over 80% of those cases occur in low and middle income countries with nearly 40% of those [cases] labelled as premature deaths, according to the Global Burden of Disease Study. We can’t fully explain the increase in cardiovascular disease in those places with population density or traditional risk factors, but we do know that these regions are severely and disproportionately affected by NTDs,” Kiera explains. Additionally, Kiera adds that due to inequities in access to healthcare in these regions, the usual recommendations for addressing cardiovascular implications may not be accessible.

The work outlined in these reviews inspired the group’s next project, the Net-Heart Book, which summarizes the literature on cardiovascular involvement in a range of viral, bacterial and parasitic diseases. “We also wanted to recognize the possibility of limited access to resources, such as advanced cardiovascular imaging and expensive interventions,” Kiera added.

“The purpose of the NET-Heart Project is two-fold. It is to create a resource summarizing literature on the often deadly cardiovascular implications of NTDs, as well as to highlight the need for prioritizing NTDs in healthcare policy, and data collection to better understand complications for those affected.”

Struck by the lack of evidence published in cardiovascular health and NTDs, Kiera became more involved in the Emerging Leaders Group, and Co-Coordinator of the textbook.

“I am proud of how we’ve gone from this set of systematic reviews to writing this textbook and seeing it come together in a meaningful way,” says Kiera. “It also created this international network of young future cardiologists who are excited about global outreach, excited about global health and the impacts of social determinants of health on disease. I genuinely think that these individuals will become leaders in the global effort on eradicating NTDs.”

Kiera also shared the level of mentorship and teamwork that helped the project succeed. “There’s a real bidirectional relationship between the younger learners in the project and some of the more established physicians… I felt like I received a lot of mentorship, and I grew a lot as a mentor to younger students throughout this project. I feel immensely privileged to have been part of this project and look forward to continuing to advocate for NTD research.”

For students and young professionals hoping to get more involved in NTDs, Kiera’s advice is simple – just start with an email. “This area is truly neglected and there is a need for passionate young professionals to contribute to the body of research and advocacy around efforts to eradicate NTDs.”

Kiera also suggests those who are interested take a look at the World Health Organization’s NTD Roadmap 2021-2030 to learn about the current efforts on NTDs and how we can mobilize governments and research. “Data speaks and the data on NTDs is really hard to argue with,” Kiera explains. “The number one domestic policy issue is healthcare, and we’ve seen time and time again that the burden associated with neglecting [to] prioritize prevention, and waiting until these health problems become epidemics is so much more costly to the government. This is a way for us to make it a priority for politicians. ”

“The more we as Canadians and young individuals express that we care about an issue such as NTDs, lobby for its inclusion in political platforms and leverage tools like social media to get the attention of politicians, the more likely it is that change will occur.”

Kiera Liblik is a second year medical student and first-year MSc candidate at Queen’s University. You can read the published systematic reviews by the Emerging Leaders Group of the Interamerican Society for Cardiology here. Find more information about the NET-Heart Book and it’s availability for pre-order here.

Listen to the complete interview with Kiera Liblik here: