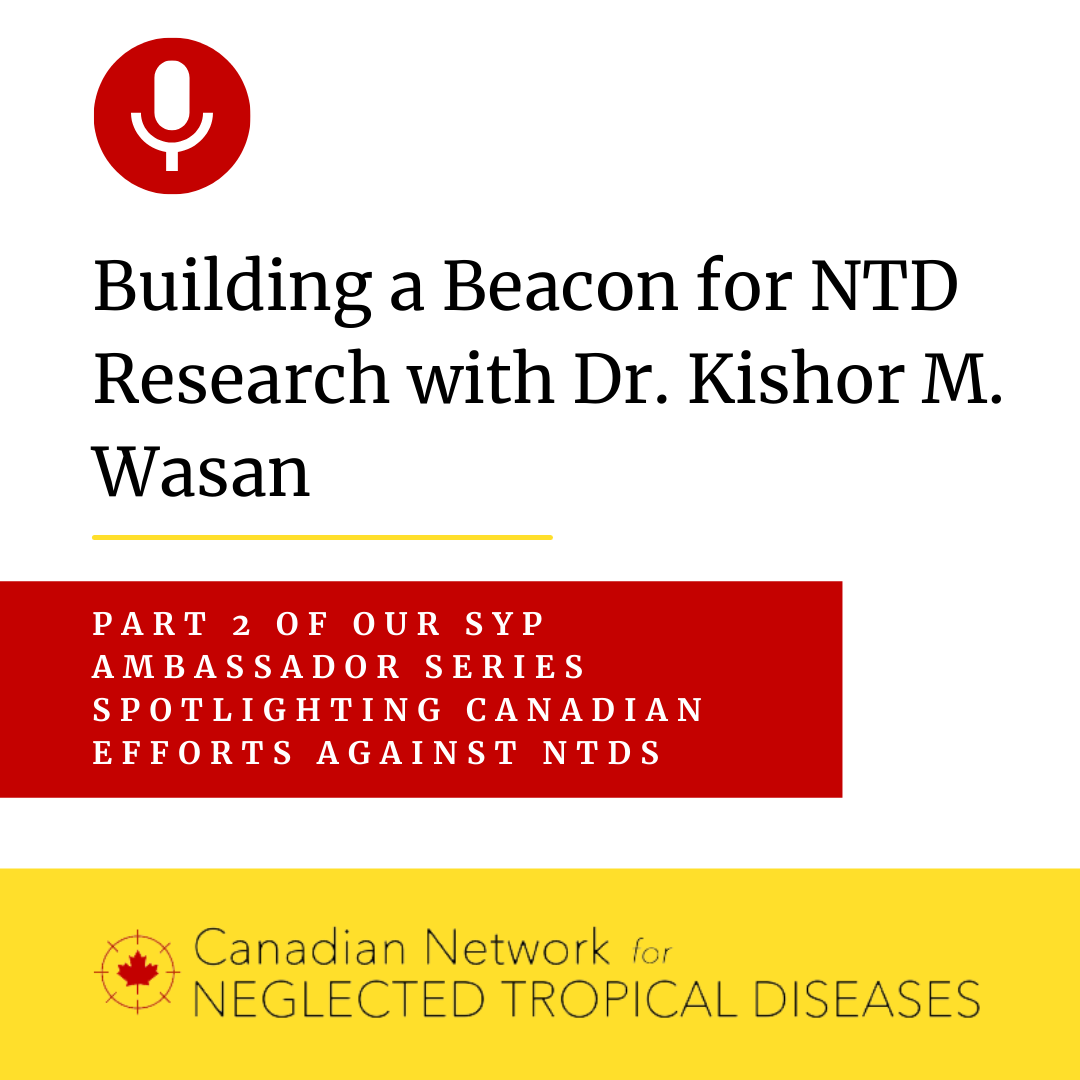 Dr. Kishor Wasan is a pharmaceutical sciences researcher who has spent his career working to combat NTDs through drug research and development and has helped to expand opportunities and impact for other Canadian NTD researchers and students. Dr. Wasan took me through his unforeseen journey into the field of NTDs, shared his thoughts on Canada’s role in NTD efforts and advice for students and young professionals.

To explain his entry into the field of NTDs, Dr. Wasan took me back to the beginning of his career. Dr. Wasan completed his PhD in clinical and molecular pharmacology, where he was involved in the development of a unique drug delivery system for the antibiotic, amphotericin B. Dr. Wasan explained that amphotericin B was effective for treating fungal and parasitic infections, which occurred often in immunocompromised patients, however patients often experience adverse effects, due to the drug’s toxicity. Dr. Wasan helped to develop a less toxic, intravenous lipid formulation of amphotericin B, so it could be used more aggressively to treat patients.

Some years later, as an associate professor at University of British Columbia (UBC), Dr. Wasan discovered a need for further development of amphotericin B. While giving grand rounds at Vancouver General Hospital on the use of amphotericin B in combination with other antifungal drugs to treat infections, infectious disease doctors asked if an “oral” formulation of the drug could be developed to give to patients prior to undergoing organ transplantation to prevent infection. After going back to the lab, Dr. Wasan and his team  developed an oral formulation of amphotericin B to meet this need.

Dr. Wasan entered the world of NTDs when an undergraduate medical student suggested he use the oral formulation of amphotericin B to treat visceral leishmaniasis. Leishmaniasis is caused by parasites, transmitted by the bite of infected sandflies. As with many NTDs, leishmaniasis affects the world’s most impoverished, with inadequate housing, sanitation and nutrition. Visceral leishmaniasis (VL), one of three forms of leishmaniasis, is often fatal if left untreated.

“The big problem is that current treatments were not accessible in the developing world. They were mostly patients that were women and children,” says Dr. Wasan. Oral formulation of the drug would allow it to be used in VL-affected communities. “Maybe that can be an alternative because then you could take the medication to the people. If you can make it tropically stable, it should be more accessible. It’ll be cost-effective.”

With support from the Bill and Melinda Gates Foundation and funding from the Consortium for Parasitic Drug Development, an oral formulation was developed capable of reducing VL load. The oral formulation of amphotericin B was the main product in UBC’s global access initiative policy, which allowed the drug to be developed at or below cost for use in affected low-income countries.

In 2010, Dr. Wasan started the Neglected Global Disease Initiative (NGDI) at UBC with colleague Dr. Bob Hancock, to bring groups together and more effectively impact NTD research outcomes. “I was running all over and it was tough trying to get research funding for a neglected tropical disease millions of miles away from Canada, where you didn’t have an infection. So I made a comment and I said ‘I wonder if there are people on campus at UBC that are having the same issue?’ I made the joke that there are neglected people doing neglected disease research.”

Dr. Wasan began NGDI to champion colleagues doing NTD research, to “bring their work and share it with the world”.  NGDI helped expand the work on NTDs, and became more than just Dr. Wasan’s work on amphotericin B. Over the past 10 years, NGDI has raised over $50 billion to support NTD research. “We now had people from all over campus and not just in the basic sciences and the medical sciences. We had engineers. We had people in the history department. We had people in the economic department. We had public health people who all wanted to be involved in different aspects of neglected tropical diseases. And so it’s become a beacon.”

When asked about the importance of Canada’s work on NTDs, Dr. Wasan shared the importance of upholding Canada’s reputation for global citizenship. “Canada always was a beacon to help the world, we are always the country that you know is out there to help the world. We need to maintain that kind of world reputation and doing work on neglected tropical diseases is one of the ways we can do that.”

Moreover, Dr. Wasan stressed a need for Canada to participate in global efforts towards NTDs, as we may one day be affected by these diseases. “Our world has shrunk because of transportation and climate change. These neglected diseases could end up on our shores.”

As the COVID-19 pandemic has shaped the world over the past year and brought renewed attention to health and disease, Dr. Wasan shared his hope that COVID-19 has increased the awareness of these diseases, and promoted the need for global efforts. “I think this COVID pandemic has woken up the world to realize that there’s a lot going on in these emerging infectious diseases. The world’s realizing, hey, what about all these other diseases?”

Dr. Wasan has helped ensure that NGDI’s work provides students with opportunities to get involved, through summer student projects, graduate student research and advocacy work. His advice to students and young professionals is to get involved early. “Get into a student chapter. Get into a group. Work for a professor. Get involved at a national or international level. There are so many chat rooms and work groups and so on. Start early because it’s really enriching.”

Listen to the complete interview with Dr. Wasan.